Susie and I visited Philadelphia a little over a week ago.  That visit, coupled with the approach of Fourth of July, has made me think about patriotism. We went to most of the typical tourist sights. We had each been when we were kids, but thought it would be interesting to see again. One place we visited was Independence Hall where they signed the Declaration of Independence. The picture below is of that nicely restored room. The tour guide was very careful to let us know that though the furniture was of that era and matched descriptions of the original, it was not all original pieces. Regardless, it gave a sense of what it would have looked like. 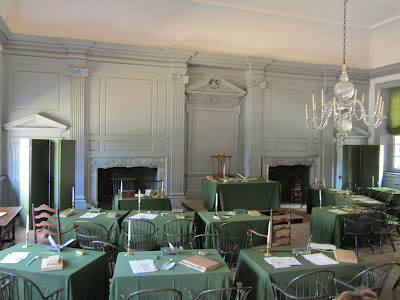 The guide told us that even though they worked on the negotiations during the heat of the summer, they kept the windows closed and the blinds drawn so no one would know what they were doing. He told of the risks they took in signing that document.

A relative of Susie’s (John Hart) was a signer and his role led to him having to go into hiding and the British raiding his farm. My initial thought was that I wished I had the opportunity to stand up and risk everything for my beliefs and my country. The more I thought about it, the more I realized I was glad that I did not have to as I am not certain how well I would act. Further, it is not like such opportunities all vanished 200 years ago. They are available today. Those were very humbling thoughts.

Fourth of July makes me think of the people who are risking (and giving) their lives for America today. It reminds me of a very powerful moment two years ago when I attended the Fourth of July parade in Milltown, NJ where I grew up. Milltown has always celebrated the Fourth in a fashion befitting a much larger town. There are fireworks, fishing tournaments, and a big, good, old-fashioned parade. Parades seem to be dying out in the era of ubiquitous entertainment. Why go to a little parade in the heat when you can stay at home and watch highlights from the best parades in the country? Milltown’s parade, however, still is well attended. The video above gives a bit of a flavor of it. It may not have been the best parade in America, but it was a good example of small town America at its best. 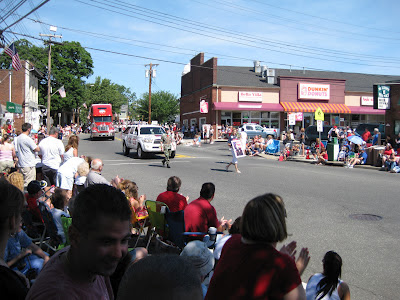 The picture to the right is of a woman carrying a poster of a soldier who died. I don’t remember whether it was her son or husband or whether it was in Iraq or Afghanistan. As she walked by with a highly decorated soldier marching behind her, I found myself tearing up. Click on the picture to zoom in and look at her closely and see if it does not affect you similarly. The young man on the poster had made the kind of sacrifice that the signers of the Declaration of Independence had risked.  And, in a different way, so had the woman carrying the poster. Again, very humbling.

Years ago someone asked me if it was possible to be patriotic if you did not agree with your country. My response was something to the effect that it is sort of like being in a family. You may not always agree with your family members, but they are family and you stand by them. You try to correct them, you try to improve them, and you try to serve them. You may even have to give them tough love and stand in the way of them doing something wrong. But, you love them and you stand by them.

In that sense, I aspire to be a patriot. I may disagree with much that is going on in my country, but it is my country. As such, I must try to improve it. Even if that means risking something. I hope I can find my way to live up to the Founding Fathers of our country. And, to that young man whose picture was marched through the parade.
Posted by Bill Catchings at 10:46 PM